Caleb Duarte is best known for creating temporary installations using construction type frameworks such as beds of dirt, cement, and objects suggesting basic shelter. His installations within institutional settings become sights for performance as interpretations of his community collaborations. Duarte has created public works and community performances at the World Social Forum in Mumbai India, Santiago de Cuba, Cuba, El Pital, Honduras, and throughout Mexico and the United States. He has collaborated with autonomous indigenous Zapatista collectives, communities in movement, and working children and refugees.

Duarte is co-founder, along with artist MIa Eve Rollow, of EDELO, a Spanish acronym for (Where the United Nations Used To BE). EDELO was a house of art in movement and an international artist residency of diverse practices in Chiapas Mexico. The project challenged the traditional artist residency and art spaces in that it placed residents alongside rural autonomous communities that have been using performance, theater, poetry, and a rich visual culture to demand drastic social, political, and economic change. The space invited collaborators to live and create within a period of time. Residents were from PHDs to jugglers, contemporary artist, activist, educators, rural farmers, and autonomous community members. Through EDELO, he is lead curator of ZAPANTERA NEGRA, in collaboration with Rigo 23, Emory Douglas and Mia Eve Rollow. Zapantera Negra united Zapatistas (EZLN) with Black Panther Party esthetics to investigate the use of the body and visual culture in both distinct political and artistic movements.

Caleb Duarte is profesor of scupture at Fresno City College in Fresno California where he has his studio. He continues to work with Central American unaccompanied minors currently seeking asylum working in community performance, sculpture, film, and painting. 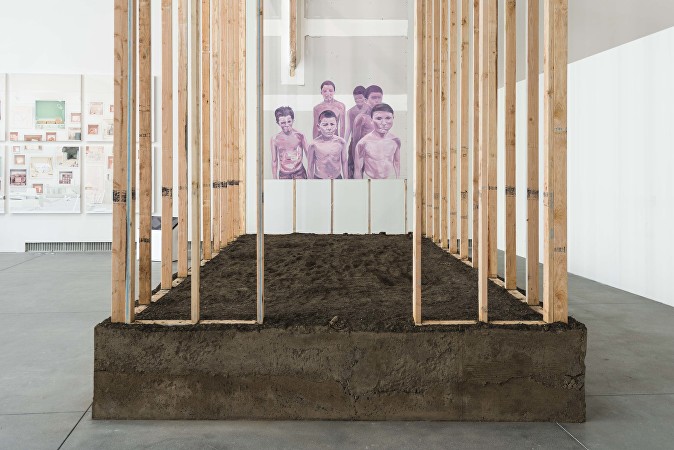